i am a simple lesbian 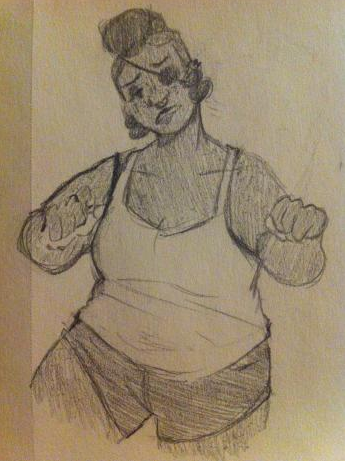 i do be thinkin about this imani i drew 😳

Some Tyto the Swift art that I've done over the past few months. The first one is one of Tyto's skins from Gigantic, the second one I made up myself.

#cosmic chatter #text #gigantic #go gigantic #gogigantic #gigantic game #ggntc #beckett #is she wearing 2 coats? or just 1 with a weird fur placement? #what's going on with that lil drape on her shoulders? #is she wearing a low-cut shirt? #we have absolutely no idea #all we know is that she's gay

#cosmic draws #my art #gigantic #dabs at this please reblog

here we are again, huh?

pov: you are beckett standing in the pre-clash field of sanctum falls. admist the flood, you find yourself disconcerned with the guardian duel. instead, you lose yourself in an unexpected, but not unwelcome, peace

here's to both a new year and a new decade

#cosmic draws #my art #gigantic #look look i say at 4am

i saw this skin in a dream and honestly? it was so cute i couldn't just...NOT draw it

ace awareness week is about over but here are my ace headcanons for some characters from go gigantic!!!

me thinkin about au ideas for go gigantic

sir cador: beats you to death

i will accept no criticism because i'm right

me thinkin about beckett and imani on a daily basis

who are your favourite lesbians

beckett and imani are the two characters in game who have the MOST history together as well as the most dialogue lines for each other.

as the lore is only given to us from snippets from their character skins, fortune cards, dialogue, and what the devs gave to us, it kinda left me having to piece together a lot but i think im accurate and a lot of people agree with me.

beckett and imani used to be in a highly organized group of sky pirates known as the "silver skull" with imani having been the commander and beckett having worked for her. being a pirate, reckless behavior typically means more rewards, and beckett, being a reckless adventurer, well, it suited her.

however, at one point, imani left and formed a mercenary squad, with beckett having followed her into that life. unfortunately, it was a poor fit for beckett, leaving to imani to scold her with becketts response being to laugh and fly away. now, what HURTS me is that...beckett held onto the skull symbol. from what we saw in the concepts, they had personalized skull designs, with imanis having a scar over her left eye. on the back of becketts jacket in her default outfit is...well, a skull with wings. on top of that, she has a winged skull pin. talk about an oof on my heart

to keep on the topic of the lore provided to us from the skins and such, whenever a characters lore mentions one, it almost ALWAYS mentioned the other (the notable examples being tmat and ramsay). additionally, they share a lot of areas and experiences in their lore (the snippets about excelsior, the pieces about a volcanic island, the goblins), and considering how often this happened there is absolutely no way that it was just a mere coincidence

beckett has 2 proximity and 2 kill lines for imani, with her kill lines being

"lights out, imani" and "sorry captain".

"i kinda miss working with you, kinda." and "long time no see, boss."

there are two deliveries for each line, but the particular tone she delivers the prox line just sent me...yknow. the first one kinda sounds like an offhand comment, but the other one, she puts emphasis on the word boss. i dont know about you, but people dont usually put emphasis on that word unless theres something in particular theyre irked about, something usually work related

based on how beckett responds to imani, its obvious that yeah shes upset with her. their last interaction (as far as we know) had been imani calling her reckless and unprofessional, and beckett just...left. becketts smart, she knows her stuff, so it didnt make sense for her to follow imani into the mercenary life if they were going for a more professional and dignified route. it seems like to me, imani scolding her was kinda just her breaking point and she didnt know how to respond, so she just...laughed and flew away.

first, i gotta start this off with the fact that imani doesnt seem to care about forming relationships with others. she has a card set that talks about how she had to see a young prince, and noted all the weak points in his armor. yeah, she couldve just been observing, but the card mentioned that, even off the battlefield, she was still at war. she's preparing for the worst. makes sense, too, knowing that she lost her sister at a young age.

second, imani has absolutely NO PROXIMITY LINES. none, none at all. i listened to everyones lines and i played a lot of imani, so this, this came as a shock tbh! however, she DOES have two kill lines, one being for an unreleased character, roland (nothin' personal, roland), and the other one for...beckett. now, when i first heard it, it HURT my heart.

knowing that its a kill line, its...odd to hear it. you dont call your enemies reckless, you dont call people you arent attached to reckless. from my experience, you use that word for the people you care about, to let them know that they shouldnt be acting like that. then...theres the delivery. again, there are two tones. the first one, she sounds annoyed, which yknow can be expected. the other...she sounds dejected, shes hurt.

its so obvious to me that they still care for each other. its just...they havent addressed their problems with each other. imani doesnt want to see beckett get hurt. hell, i have a headcanon that the REASON why she went into mercenary life because its safer to be a mercenary than a pirate, and she didnt want to see beckett getting herself seriously injured or worse. on the otherhand, beckett, who i headcanon to be neurodivergent, she didnt understand.

i always interpreted their relationship as pirates being a casual one, like sleeping together and the like, with beckett wanting it to be something more. with the sudden change from a pirate to a mercenary, and no longer being able to be reckless...i dont think she fully understood why imani was so angry at her when that was how they always did things. that would explain why she laughed and flew away. no remarks. no comments. she just laughed. i think she was caught so off guard that she just...it caught her off guard.

i like to imagine that, after having to work together under aurion's banner, they are able to talk (its pretty clear to me that beckett is open to talking, based on her prox lines. imanis silence hurts, though) and work things out, and finally actually get together.

yeah, it goes into headcanon/personal interpretation territory but like, considering the AMOUNT of lore they have on top of how they respond to each other...man the only explanation here is that they're lesbians, chief

#cosmic chatter #ask #gigantic #beckett #imani #i love beckett so much it makes me so emotional #she has this ace pilot persona but when she gets scared or unsure it just...it just completely falls #and she actually isnt confident in herself shes just afraid and insecure and it WOUNDS me i say #babushka

ooh what are they guardin'?

the world, in a sense!

the guardians power and life force comes from their bond with the land. as a matter of fact, the only way to strike down a guardian is to sever that bond, thusly leaving them vulnerable.

of course, the guardians will fight for control over the land, and depending on the ruling guardian depends on the land! by that, i mean that like...the land alters itself based on the guardian in control. grenn is a guardian that comes from the rift, a toxic, magic wasteland, so if he's in charge i can assume that the land becomes rife with dangerous magic

so where does gigantic go

there are gigantic guardians which is why the game is called gigantic!

#cosmic chatter #ask #gigantic #the one here is grenn who is a naga #the other guardian in the game is leiran!! shes a griffin #babushka

who's the most chaotic character in go gigantic and why

i wanna say its mozu! 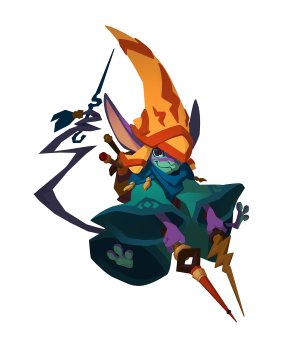 she's a goblin who wanted to become a wizard! however, no wizard wanted to teach her so she just stole their wands and is now teaching herself how to become a wizard. asides from wands shes kinda just a littol thief in general, although if she respects you she wont usually steal from you (she WILL wanna try out what interests her though). she doesnt like pakko bcuz she wants to be the only cute one

her constant mood is >:3c and she pit pats when she runs